If your footage doesn’t have the professional “cinematic” look that you want, the problem probably isn’t your camera – it’s probably your lighting.  Good lighting can tell a story, set the scene, and – ultimately – engage the audience.  The Film/Media Studies equipment collection is well-stocked with a variety of lights to help make your footage look great.

LED-based lights are becoming increasingly prevalent on film sets.  LED panels are highly efficient, don’t get excessively hot during use, and provide soft, even light.  Many LED lights can be battery-powered, making them a good choice for portability.  The downside of LED panels is that their output is generally lower than lights that use tungsten bulbs and the light they produce tends to be more diffuse.

The Film/Media Studies equipment collection contains two kinds of large LED panels: Lite Panels 1x1s, and Genaray SpectroLEDs.  Both are daylight color temperature (5600K) and both are powered using Anton Bauer batteries (although they can be converted for use with AC power).  The Genaray lights can be controlled from a distance using a small remote.  Because of their soft and even output, these lights are ideal for staged interviews.  Their portability also makes them a very popular choice.  These lights should be used with a standard light stand. 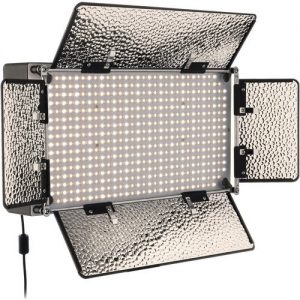 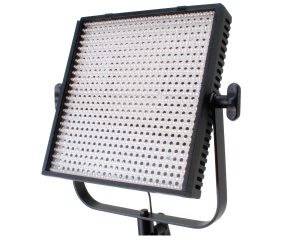 These small LED panels can be mounted onto a camera’s hotshoe or a 1/4″-20 screw (tripod mount).  The kit includes the light, two batteries, a charger, and a ball-head mount.  These lights are a good option when portability or size are important considerations.  The color temperature can be adjusted. 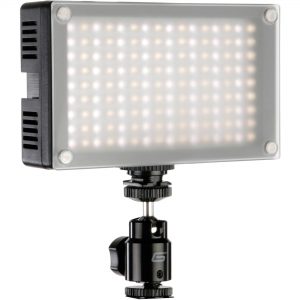 The Kino Flo Celeb is a large, high-quality LED panel with variable color temperature.  It produces even, flattering light.  At roughly 24 by 14 inches, the Celeb is much larger and heavier than the LED panels made by Genaray or Lite Panels.  As such, it should be mounted on a large lights stand.  The Celeb requires external power and can be controlled via DMX.  There are also preset controls on the unit itself. 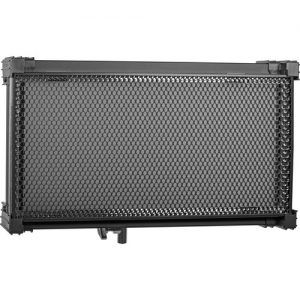 Fresnel lights have a special lens in front of the bulb that allows the light to be adjusted from flood to spot.  Fresnel lights may use LEDs or tungsten bulbs.  Because the beam can be adjusted, fresnel lights are a good choice for situations where you want lots of control over how a scene is lit.  They are also useful as rim/hair lights in staged interviews.

These large fresnels use LEDs, so they run cool.  The color temperature is set to tungsten, so they match the smaller fresnel lights in our collection.  These lights offer a lot of variability in terms of the angle of the beam they produce.  They can be controlled via DMX or using dials on the lights themselves.  These lights are not set up for battery use, so AC power is required.  Standard light stands can be used. 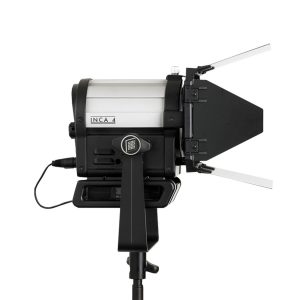 Small tungsten fresnel lights by Arri and Lowel are available.  Since these lights use tungsten bulbs, they will get hot during use and should only be handled using gloves.  Standard light stands are recommended. 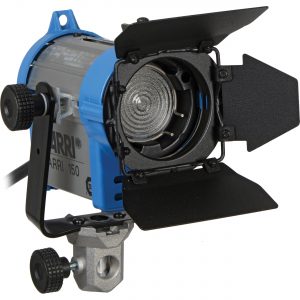 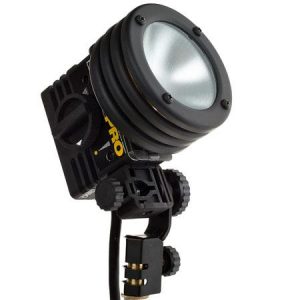 This is a large, powerful, and very heavy LED fresnel light with adjustable color temperature.  It can be controlled via DMX or using controls on the unit itself.  Because of this light’s weight, it should only be used with our largest heavy-duty light stands.  It can also be ceiling-mounted for use in the studio. 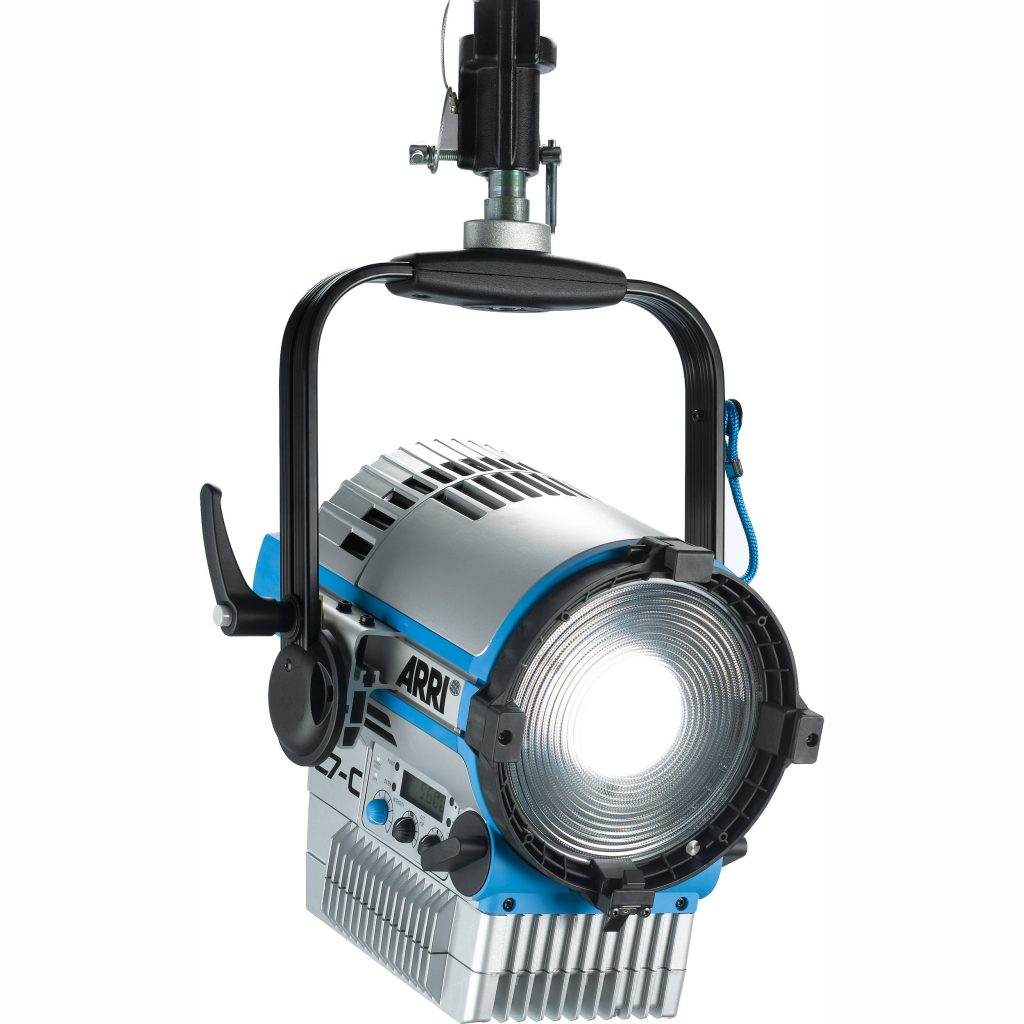 This is a very large and powerful spotlight that can be set to a wide variety of colors.  This kind of light is often used for theatrical productions, but it can also be a powerful tool for filmmakers.  The Source Four can be controlled either via DMX or a panel on the back of the light and it requires AC power.  This light is very large and heavy, so it should only be used with our largest heavy-duty light stands. 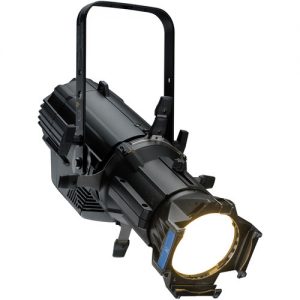 Unlike a fresnel, an open faced light has no lens in front of the bulb.  Because of this, they produce harsh light and shadows.  This makes them effective for creating dramatic lighting effects, such as film-noir lighting.  Film/Media Studies has a set of Smith-Victor Q60 open faced lights with barn doors for controlling the shape of the beam.  These lights get quite hot during use, so gloves should be used to operate them. 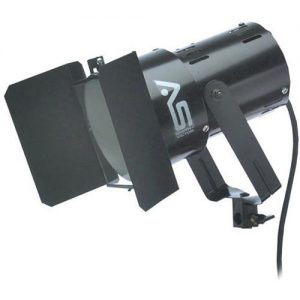 Like LED-based lights, fluorescent lights are efficient, don’t get excessively hot, and produce soft, even light.  Because they use tube bulbs, fluorescent lights are more fragile than LED panels.  They are also often larger and heavier, but they can produce a lot of light over a large area.  When filming using fluorescent lighting, be sure to check whether the camera is picking up any unwanted flickering — if it is, you may need to adjust your shutter speed or frame rate.

The Kino Flo Barfly is a large fluorescent panel.  While the light requires AC power, it can be packed into a custom hard-sided case for transport, making it relatively portable.  The Barfly produces a high output of soft, even light, making it a good choice for illuminating large spaces.  Because of the light’s size and weight, it requires a large light stand. 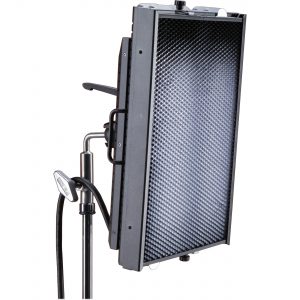 The Kino Flo Image 45 is a very large fluorescent light fixture, designed to be ceiling-mounted.  The Image 45 produces a broad, even beam of light.  It can be controlled via DMX, although there are minimal controls on the unit itself.  The Film/Media Studies department uses several Image 45 fixtures for controlled lighting in its production studio.  These lights can be mounted on our largest heavy-duty light stands, for specialized studio lighting or field use.